What is Stake and Yield?#

Stake And Yield is a newly developed reward system, whereby users are able to earn staking rewards and farm additional yield with the same liquidity.

Staking allows users to lock their single asset (sDEA, sDEUS) or liquidity tokens (BPT, sUNI-DD, sUNI-DU, sUNI-DE) in the DEUS Vaults to earn a share of the fees generated by the trading volume on DEUS. Your earnings grow proportionally to the amount of capital you have staked.

The Vault Exit System allows users to exit the vaults with minimum disruption to the collateral system that supports DEUS Finance.

This system works by gradually burning the sDEA/sDEUS value of the users’ stakes, and giving them DEA tokens in return.

When a user decides to exit the vaults, the Vault Exit process is initiated. From that point onwards, every single day, a set amount of sDEA/sDEUS from the user’s stake is burnt. The user is then able to claim the equivalent amount of DEA tokens every day.

Currently, the Vault Exit process will takes 75 days. Ultimately, users will be able to exit the DEUS Vaults in 14 days but we will adjust the timings organically as the system develops. The Vault Exit system currently only supports single token Vaults (sDEA/sDEUS). The next iteration will enable users to convert their BPT tokens to sDEA, to allow anyone to exit the vaults (BPT->sDEA->DEA). 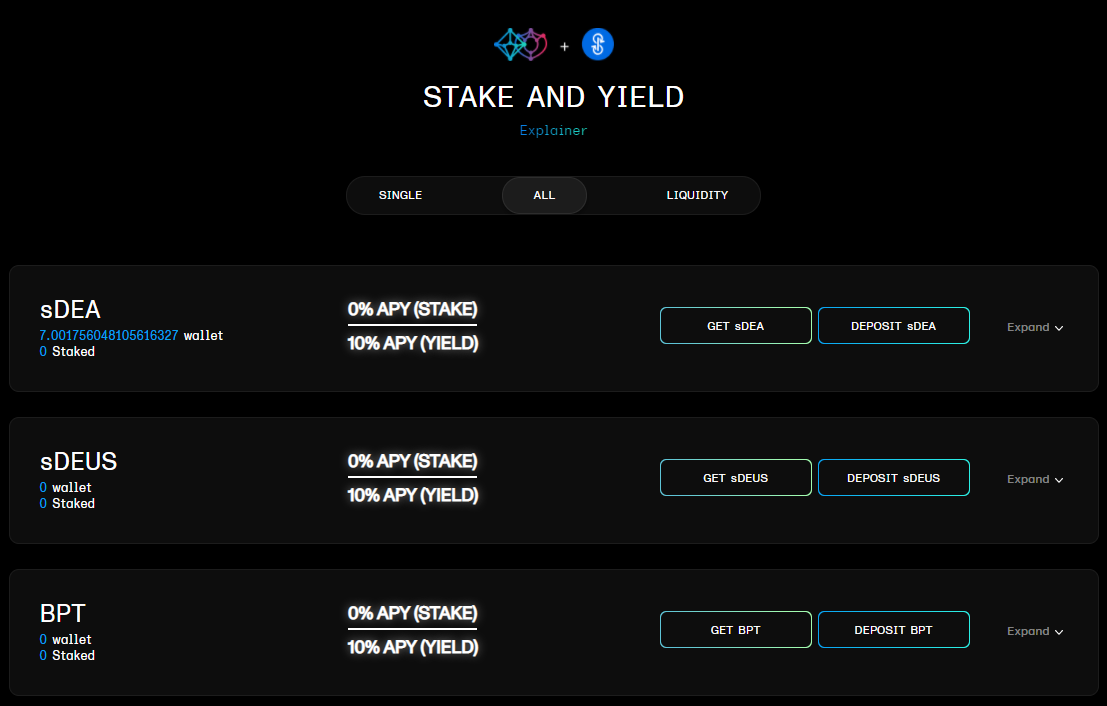 While staking is a good way to earn passive income, liquidity providers must exercise due diligence before locking their tokens in the vaults. What are the risks?#

What tokens can I stake?#

Single pool tokens have no risk of impermanent loss but generate less rewards.

How often do I get rewarded for staking and how often can I collect those rewards?#

Users receive rewards every 15 seconds and may collect at any time.

No, rewards may vary and APY's can change at any time, depending on a variety of factors such as: amount of users in pool, daily trading volume and trader losses.

I was previously staking in the old pools before vaults, did I lose my tokens or rewards?#

No, users may collect tokens and rewards from the old pools HERE.

Are there any fees associated with collecting rewards?#

There are no fees for collecting rewards imposed by the DEUS ecosystem, but there are gas fees charged by the Ethereum ecosystem and these vary by network congestion.

How many rewards can I get with X amount?#

The more value you add to the ecosystem by staking, the more rewards you can expect to get in return. Users can either earn trading fees only or use their staked tokens to borrow the underlying ETH from the DEUS Treasury, which is then used in farming protocols to maximize returns on their capital. The amount of ETH that can be borrowed is based on the current value of your staked DEA, minus the slippage.

Do I have to un-stake tokens from the old vaults and re-stake them in the new Stake and Yield system?#

Yes. As the new rewards system is built on brand new smart contracts, it is necessary to withdraw the balances from the old contracts and transfer them to the new Stake and Yield smart contract.

What is the Vault Exit button used for?#

When you stake your assets in the new Stake and Yield reward system, the tokens get locked in the DEUS Vaults for an undetermined period. If you select the Vault Exit ON button during the initial staking process, you will automatically trigger the exit process upon entry, meaning you will only enter the Vaults for a set amount of time. Vault Exit ON button allows you to effectively decide the duration of your time in the DEUS Vaults.

How does the Vault Exit process work?#

Once you have staked assets on the Stake and Yield page, a new interface appears, which shows you more detailed information about your stake. If you press the Enable Vault Exit button and confirm that you are happy to exit the DEUS Vaults, a process that ensures a timely exit from the vaults begins. At the beginning of the new rewards system, the Vault Exit process will take up to 90 days. For example, if you have staked 90 sDEA, every day 1 sDEA is burnt and you receive 1 DEA in return. As time goes on, we will reduce the time it takes to exit the vaults to around 14 days.

Why is Vault Exit on the same page as Stake & Yield?#

That’s because the entire Stake and Yield rewards system is built around the same smart contract. For simplicity, we didn’t want our users to have to jump through many different interface pages to execute simple commands.

Can I exit the DEUS Vaults and still get rewards?#

When you initiate the Vault Exit process, your rewards get reduced by a set amount every day until your stake is released from the Vaults in its entirety. For example, if you have 90 sDEA in the Vaults and the Vault Exit process is initiated, you will receive 89 sDEA worth of rewards one day later. Two days after initiating the process, you will get 88 sDEA worth of rewards and so on and so forth, until your stake reaches 0 and has been converted to DEA in its entirety.

How is the slippage on the borrowed assets calculated?#

The more DEA that is used as collateral to borrow ETH from the DEUS Treasury, the bigger the slippage. For example, if the total amount of staked assets in the Stake and Yield is equivalent to 1300 DEA, the current slippage when swapping that amount to ETH is 10.2%. If at this stage you deposit 10 DEA to the Vaults, you will be able to borrow [10-(10*10.2%)] 8.98 DEA worth of ETH from the DEUS Treasury to be used in other farming protocols.

What is the Unfreeze button used for?#

The Frozen section of the interface controls the assets used as collateral to borrow ETH from the DEUS Treasury. If you choose the Stake and Yield or Yield option during the initial staking process, your assets get frozen as a safety measure. You can choose to unfreeze your assets, which occurs every 8 days. Once that time passes, you are free to withdraw your assets back to your wallet (sDEA, sDEUS, or liquidity tokens). If you want to exit the vaults and convert your assets back to DEA, you still have to follow the Vault Exit process.

What is the difference between Unfreeze and Enable Vault Exit buttons?#

Enable Vault Exit initiates the process through which your stake gets progressively smaller and converted to DEA day by day. Unfreeze button extracts your assets away from the Yield function of the reward system.